As I’ve mentioned in another post, it was in meeting Bob Geldof who starred as “Pink” in Pink Floyd’s The Wall released in ’82 who inspired me to give the stagename P!nk for an artist I was writing songs for.  Geldof is the singer, songwriter, author, and political activist best known for his work on Band Aid and Live Aid.  In the ’70’s he was the lead singer of the Irish rock band The Boomtown Rats with John “Mutt” Lange producing some of their albums.  Lange who also produced Def Leppard’s ’83 hit album Pyromania.

As a child, I was inspired by the Danish entertainer Victor Borge to want to be a classical pianist.  It was Borge’s stage act on “Phonic Punctuation” which inspired the ! in P!nk.  I also hated when little girls would draw a heart at the top of an “i” which my friends were known to do, so to solve the problem I turned the “i” upside down.

Michael Hutchence and INXS knew of this and soon a movie script was developed titled “Pretty in Pink” released in 1986 starring another redhead, Molly Ringwald, Andrew McCarthy, Jon Cryer, James Spader, and others.  INXS lent the song “Do Wat You Do” to the soundtrack. 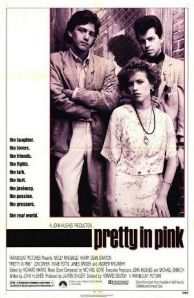 I would also make up the song “Pink” which would be performed by Aerosmith released in 1997.