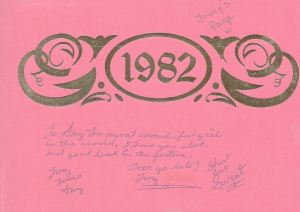 Kurt Cobain did not have a relationship with a girl named Tracy Marander. This was a girl he knew and gave the name Tracy for my ex-boyfriend. (See 1982 of which the page is bound into my school annual)

Kurt does not have a sister named Kimberly Dawn. Kimberly is my sister-in-law’s name. Dawn is the street I lived on in 1983 when I met them.

Kurt claimed to have an aunt named Mary, for the Mary in the song “Lose Control” performed by Evanescence which I wrote when I was 15 in 1983.

In all the years I knew Kurt, I never once saw in inject himself with a syringe. That is not to say he didn’t do drugs. 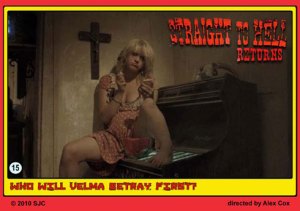 The movie Straight to Hell released in 1987, the actress which goes by the stage name Courtney Love looking very much pregnant and I don’t believe that is padding.  Do you?  There is a girl who is part of their clan which Kurt Cobain claimed as his half-sister Breanne, who would be about the right age.  Actually, Breanna is my cousins name which he used.

Courtney’s character’s name in the movie Straight to Hell is Velma. In the town where I grew up, Trussville, there is a bar by the name of Velma’s Place.

Just as Courtney Michelle Love is not her real name.  Her birth certificate is a fake showing her father at age 15 and mother age 20 at the time it happened to be recorded in 1973. 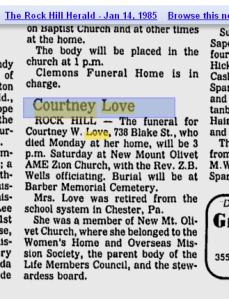 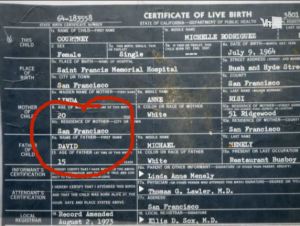 Rock Till You Drop

, 1983, my friends invited me to the Def Leppard concert. I didn’t know who they were, but told it was a rock band. Of course, this was cool on so many levels being a 15 year old girl and never having been to a rock concert before.

Monday, May 16, 1983, I returned home from school, dropped my school books on the dresser as the doorbell rang. A young goodlooking guy with bright blue eyes smiled as I opened the door. Without a word he pointed to the old van parked at the top of my drive. The side door swung open and my mouth dropped as the lead singer in full stage costume exited. If the phone had not started ringing, distracting me, I might have been more concerned about how and why this man knew where I lived.

NOTE: In 1983 Def Leppard was on tour in the US promoting their January released Pyromania album as the support act for Billy Squier before embarking on their own Rock Till You Drop Tour.  They ended the tour with Billy Squier in April of ’83 in Seattle and Oregon.  May 15, 1983 the Swiss band Krokus was their opening act.  Little known fact, Kurt Cobain was on the road crew for this tour.